A lot of stuff has been happening recently, and time has been sparse.
I took some time to write this though. Soon I will also write a recap of my The Sprawl campaign for sessions 3.5 to 6, plus the usual GM insights.

The topic today though, is The Quiet Year, of which I joined a game of, last Monday.
In this blog post I will share my experiences with The Quiet Year.

The Quiet Year is a GM-Less, roleplaying game focused on drawing a map together.
The group is playing a community which, after lots of war, has a (quiet) year, to rebuild, and learn how to work together again.
There are 4 seasons (all depicted by the suits from a normal deck of cards), which are drawn, and events according to the drawn cards are executed.
Everything that's discovered/decided/… should be drawn on the map. Ideally you should write as less as possible (Fun Fact: All the text you see was written by me).

How did it play out? 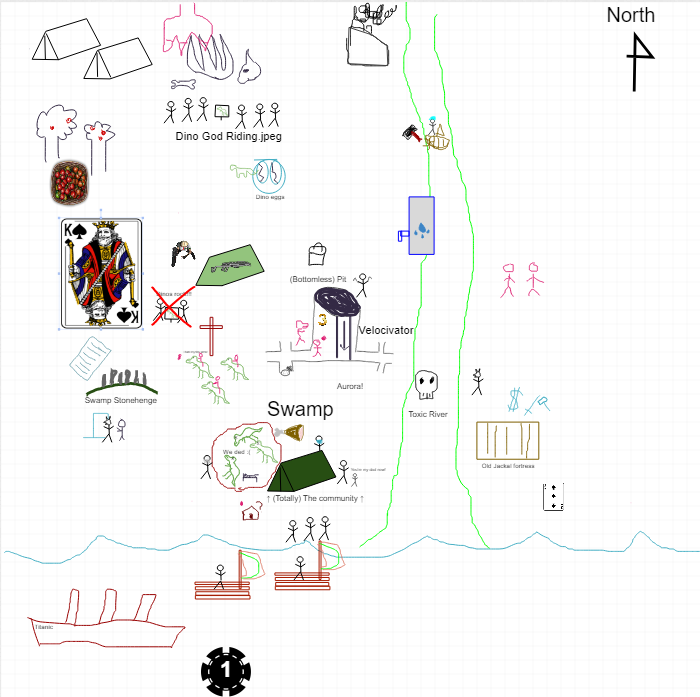 The rules were really easy to grasp:

Our group was in a swamp setting, with a toxic river and the sea nearby.
It all went pretty normally, until I drew a card that prompted me to introduce some natural predators.

Hmm … Okay, I have a really silly idea for the predators: Dinosaurs!

Oh boy, it was anything but silly! Another player escalated it to a Velociraptor-Cult, another player added a huge Dinosaur to the top of the map, there were Dinosaur-Human-Hybrids, coming from labs at the bottom of a bottomless pit. People tried praising the huge Dino-God, so it would protect them, but that got hijacked, so instead they tamed it.
When the game ended, and the Frost Shepherds came, to bring war to the community again, the community just saddled up, and started a nomadic life on the back of a huge dinosaur.

It was very nice. Especially considering, we were just 4 random people from a Discord server.
The game was easy to learn, after a round we all got it.
We built on each others ideas, getting to strange things like Velociraptor-Cults (which is what GM-Less games are especially good at).
This setting/map may be used for a campaign in a classic system (feel free to … though you probably don't get what most of these scribbles mean).
It's a Oneshot game, but that's not a bad thing.

If I get the chance, I'll definitely play another round of The Quiet Year. See what other weird stuff, we might get in the end.