It's me again!
This time I will speak good of a tabletop RPG!

The RPG I will speak good of today is a small system made by John Harper called Lasers & Feelings. 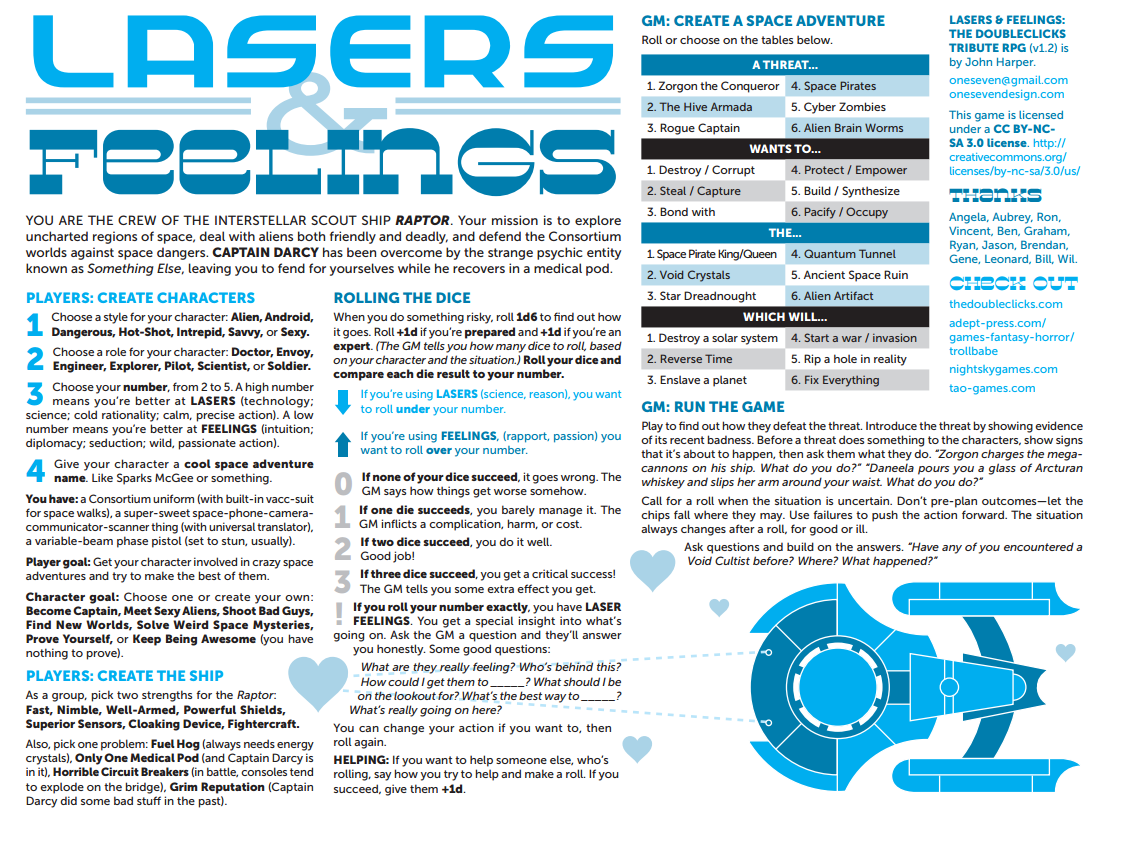 Just one page of rules, and freely available. Great!

The first paragraph of the rules sums it up pretty good:
The group is the crew of the interstellar scout ship Raptor. Due to Captain Darcy being overcome by Something Else, the group are now in "command" of the Raptor. They can go out and do all sorts of space stuff.

The base setting is obviously Sci-Fi, but the rules intentionally do not say too much about the setting, leaving it to you and the group to fill in the gaps.

About a fourth of the rules are character creation.

And then there are two things to decide as a group:

Thus, right from the beginning, there are a lot of hooks to involve your players in.
Unless all players chose "Keep Being Awesome" as their goal you have hooks to wave at your players for them to bite.
But the ship also has its problems, great to use when you want to escalate a situation. And more hooks.
And in case nothing else seems appropriate, Captain Darcy still sits in his medical pod, ripe to be turned into a story hook.

Actual playing rules are simple again:
Whenever players do something risky, they should roll their dice.
Their dice means:
1d6 by default. Add 1d6 if they were prepared. Add 1d6 if they are an expert in this thing (if you're an expert is decided by the GM based on your character and the situation – your style and role mainly influence this). Add 1d6 if someone helps you.

Usually you have somewhere around 2 dice, to roll.
You need to roll either under your number, to do something science-y (Lasers), or over your number to do something feelings related.
If any of the dice you rolled show exactly your number, you get some special insight into the situation, and may ask the GM a question they have to answer honestly. Then you may change your action, and roll again, or stay with your result.
Depending on how many dice rolled under/over your number the situation advances either in your direction, or goes awry. In my experience you often get one success, thus manage to do what you wanted, but there is some complication, harm, or cost.
But even if you don't manage what you want to do: The situation gets worse. This is great for failing forward, rather than "I want to persuade him to come with me" rolls bad "Nothing happens, he doesn't care".

The rules also don't tell you whether "shooting a criminal" is a Lasers or a Feelings action. The game almost incentivises you to "game" it:

But this is not bad! Quite the opposite, it is good!
It makes the players look cool, and accomplish things, but it also doesn't get boring with characters who can't fail, because, as mentioned before, you often only roll one success, so you manage to do it, but some other bad thing happens, slowly escalating the situation.
We are not playing to watch players fail, and horribly die, but we are playing to see the players struggle against a threat, and manage to escape it nearly.

In the other third of the rules there is a big table of GM inspiration.
I did not use it before, but it is great for making stuff up on the spot, asking your players to fill in the gaps. 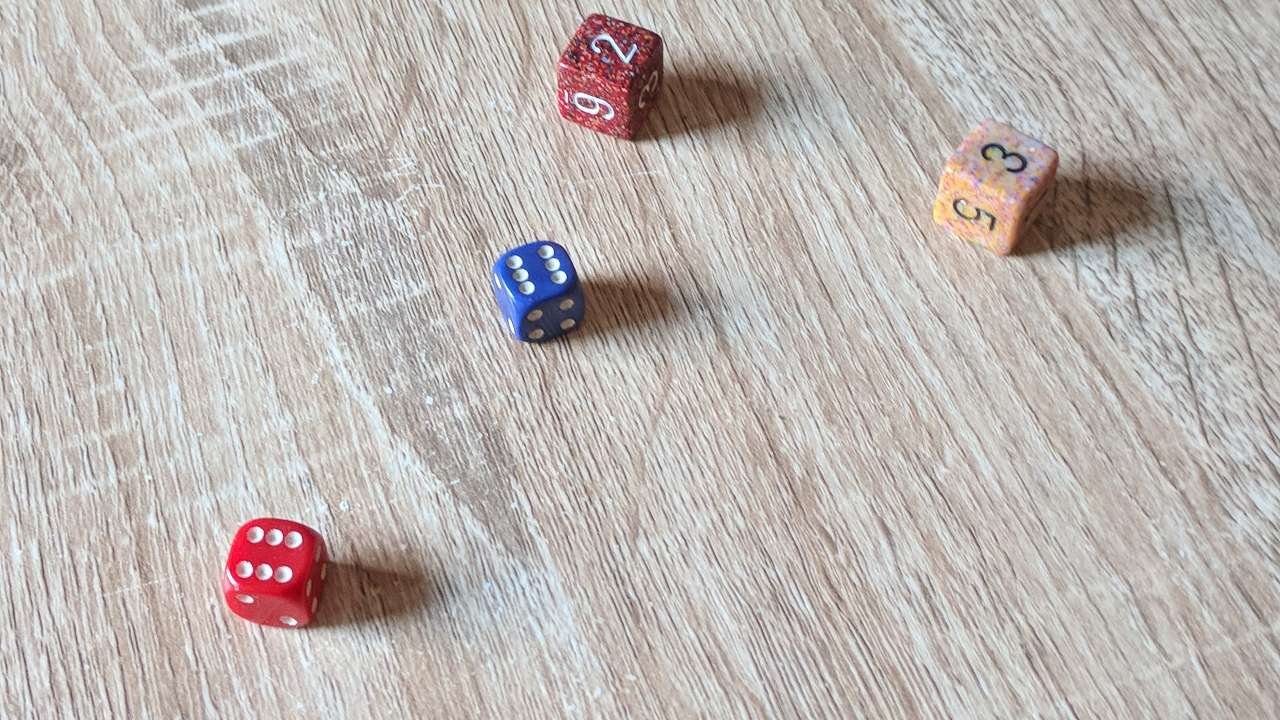 The Hive Armada wants to bond with the alien artifact which will fix everything.

You can immediately ask your players:

Alien Brain Worms want to occupy the void crystals which will enslave a planet.

Again, you can ask your players:

Last thing is some generic GM advice. Don't throw badness at the players immediately, but foreshadow it (no one likes a "You're shot, now you're all dead. GG"-story), and do not pre-plan outcomes.
In fact: Do not plan anything in Lasers & Feelings. You should not plan too much for any RPG, but especially in Lasers & Feelings you should not plan anything at all.
Tap your players creativity. "Ask questions and build on the answers."

Let's ask ourselves Jared Sorensen's three questions about Lasers & Feelings.
They are no holy grail of game-design, but an interesting point from which to look at a game.

What is Lasers & Feelings about?

Lasers & Feelings is about characters jumping into action, looking cool while doing so, and often barely surviving it.

How does Lasers & Feelings do this?

The action is all around the players to begin with.
The characters are in a big galaxy with their own goals to pursue, but there are also threats to be aware of.

Due to the system being skewed in the players favor (by them being able to "game" it by using their better ability more often) players do not just fail, but they barely manage it, thus characters often barely survive.

How does Lasers & Feelings encourage/reward this?

Apart from having fun, and maybe a feeling of accomplishment for completing your goal, there are no rewards in Lasers & Feelings.

The game encourages jumping into action however, by there not being many rules to be aware of.
Action always is just one roll away, and players do not have to fear dying horribly, due to the system being on their side.

Lasers & Feelings is a nice rules-light system, that doesn't take itself too seriously.
The situation gets worse over time, and players will have fun trying to save themselves from the mess they created/got themselves in.

Lasers & Feelings is a very good for one-shots, but it should work for multiple sessions, with a continuing narrative, too.

Oh, and there are tons of hacks for Lasers & Feelings. You want to play in a Cyberpunk setting instead? Try Neon & Chrome! 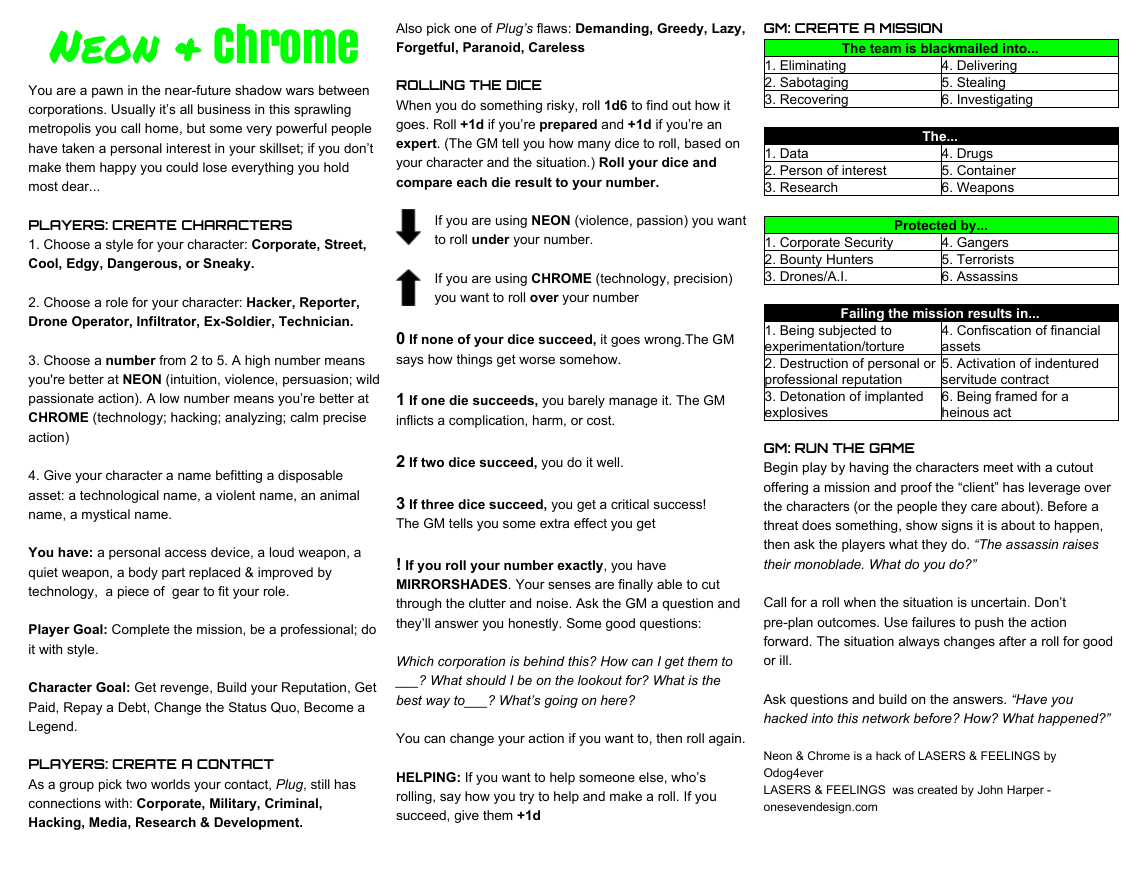 Post Note: Neon Chrome: Surprisingly not that good! I think it takes itself too seriously for Lasers&Feelings, which itself is pretty over the top. Maybe I should write about Neon&Chrome some time.