Everyone liked my Shadowrun 5E rant. Let's do it again!

Last week I told you that Shadowrun 5E's rules are garbage.
But Catalyst listened to everyone shouting "The rules suck!", so they made Shadowrun: Anarchy.
A rules-lite version of Shadowrun, distributing the GM authority around the table. Shadowrun: Anarchy is based on the Cue-System (never heard of it).

Literally the first Sentence – Which explains a lot. Shadowrun's rules are not accidentally broken, they are broken by design.

What about the other 9%? Rounding, and other things. This isn't a maths blog.

IT'S PROBABLY BEST IF ONLY GAMEMASTERS READ THIS CHAPTER.
Sorry, players. We love you, and we hope the rest of the book offers lots of fun for you, but the fun might be maximized if you keep yourself from knowing some of the material in this chapter.

This chapter is 30 missions for the players.
They all have a Mr. Johnson's Pitch, Objectives, Tags, Setting and Scenes.
Most of the Scenes are things you as the GM can implement sooner or later. They are not too specific, but tied to the job. If the players decide to skip the job/turn on the Johnson: Bad luck.

They are also very pre-written. As the GM you will not be surprised by what happens in the mission … You will know exactly what will happen (unless your players decide to turn on the client).

Sometimes the twists are so railroad-y, even the writers feel bad for it:

He smiles and says, “Me neither,” and breathes his last. (Don't force this death. If the players try hard to save him, that is okay.)

Oh, and the Johnson might be a pre-made player-character.

So you meet the Johnson. She's the clone of player X.

The missions aren't really bad though.

It's Shadowrun. What did you expect …

There is no boat-loads of skills, weapons, cyberware, qualities, etc. now – some of it is summarized.
Not all of it though: 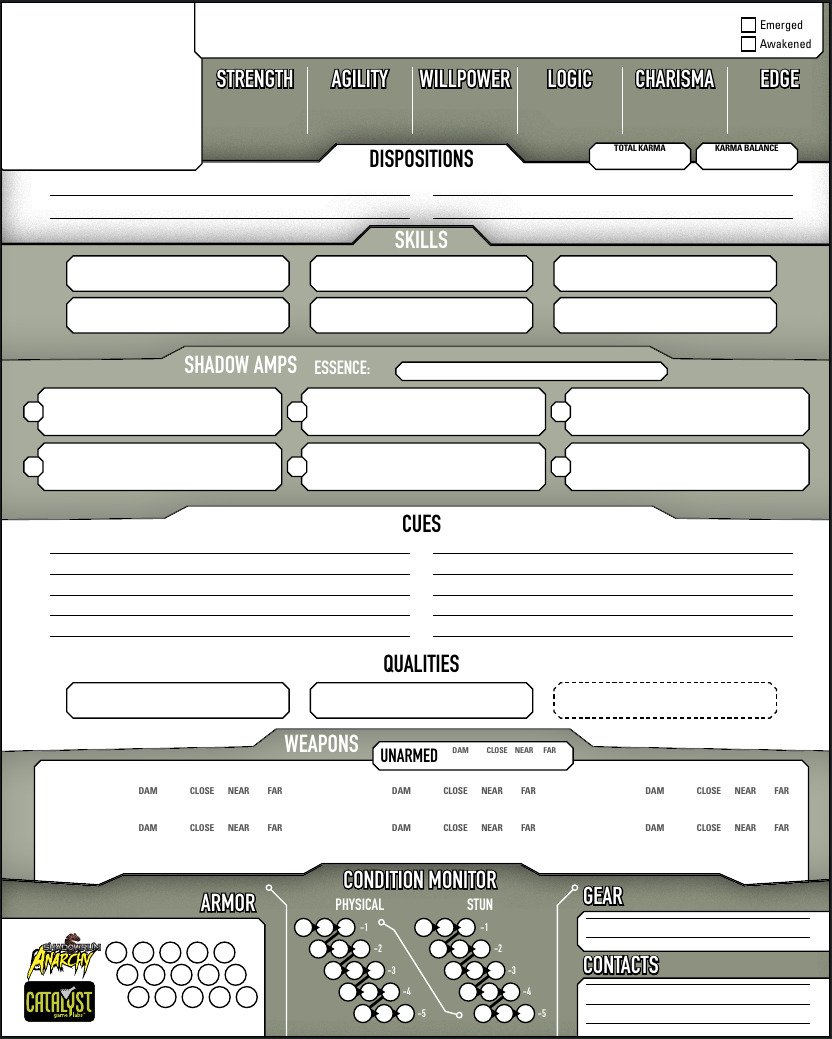 The attributes are condensed into 5 attributes and Edge, rather than 8.
You can only have 6 skills, and they are skill groups, rather than boatloads of skills. There still are specializations though. And there's still a list of skills you have to pick from, rather than creating your own skills – of course including weird stuff like Piloting (Other) and Heavy Weapons (completely different from Firearms, and definitely not the same as Projectile Weapons).

Karma includes both money and actual Karma in Shadowrun: Anarchy. So no more mages being angry about getting paid too much money, and Street Samurais not knowing what to do with their Karma.

Cues (and Dispositions, too): Are flavour-text, intended to help you define your character. No bonus for playing them out like in FATE? That's what the system is named after?

Qualities, like in Shadowrun 5E, are advantages or disadvantages. Every character has to have two positive and one negative quality.
They are mostly positive or negative dice pool modifiers. Not too much special stuff going on here. That's nice.

Weapons and Armor: Obvious. Though no ammo needs to be counted for weapons.
Armor also gets used up with each hit it takes, rather than it recharging after each shot. Taking no damage, because you're wearing a huge armored vest doesn't work in Shadowrun: Anarchy.

Other Gear goes under Gear. No stats needed. No 20 commlinks each with slightly different stats.

Last but not least, the condition monitors: Working somewhat like in Shadowrun 5E. Accumulate points in these, and you get negative rolling modifiers.

The most basic structure in Shadowrun: Anarchy play are Turns and narrations.

Each turn, every player has a chance to play out and describe their character's actions, along with other elements of the story going on around them. These descriptions are called Narrations, and as the game progresses these Narrations build on each other and form the story of the game.

The GM gets to start each turn, and sets the scene for the players. After them, the player to their left get the next turn, to narrate what's happening with their player and the world around them. The other players, by design, should not throw too much of their own ideas in. If they want to take over narration, they can "steal" it via plot-points (more on them in a bit). The game is built upon Passing the mic around clockwise.

If however you don't want to do any mechanics, and just talk to someone (like meeting Mr Johnson, or questioning a witness), everyone can agree to have a Talk Time. If tests are being made Talk Time is immediately over however.
What if you want to do talking while doing a test from time to time? Enter and quit Talk Time a lot, I guess?

This is good for distributing authority around the table, and letting everyone (even the quieter players) have their turns, but since this is a game about collaboration, and talking together (rather than, say Microscope, where others should not influence you) the strict turn order not allowing other players to properly talk at other players turns, even when there is no fighting going on does not feel good.

The other important thing of the Cue-system (other than Cues, which are only flavor text for inspiration, rather than a mechanic) are Plot Points.

Plot points are used to interrupt or alter another player’s Narration — a method of adding a twist to the game. They can also be used to change player turn order, add a glitch die, or gain back a point of Physical or Stun damage. The ways players utilize Plot Points are only limited by how creative they want to be.

Players start with 3 plot points each, and can have 5 plot points at most. The GM can award plot points for good narrations, but sometimes Shadow Amps give the players plot points, too.

The GM starts the game with 1 plot point. Every time a player uses a plot point, the GM gets this plot point. A GM has no upper limit, on how many plot points they can have.

Players or the GM can spend one plot point to:

Why punish yourself for no reason (like in FATE where your get FATE points)? I don't know.

The GM can spend a plot point to go anti-clock wise, or start narration at a random player.
When the GM spends plot points they can only influence the players by adding a Glitch-Die. Every other aid/hindrance has to be made against NPCs. If the GM uses a plot point it is gone.

Rolling dice is very similar to Shadowrun 5E. D6-Dice pool. Every 5 or 6 is a success.
You either roll against a fixed number, or against an opponents pool (even when shooting, no more roll 4 times to hit someone).

Edge refills at the start of a session and can either be used after rolling to re-roll every dice that does not show a 5 or 6, or can be used before rolling, to add an extra dice and count 4, 5 and 6 as a hit.

It is a Shadowrun game, so of course there has to be some cruft and weirdness.

There are optional matrix rules:

Astral projection are 8 lines of text. Why would you want to astral project? Not included in Shadowrun: Anarchy. If you want to know that every person has its aura, and so on you need to buy the Shadowrun 5E books.

Optional rules for breathing, environmental conditions (like toxic waste, or an airless vacuum …, yeah, happens all the time) and mind control.
We all like these sigh.

Most of this cruft is optional though!

My problem with the Cue-System

The gist of Shadowrun: Anarchy is the Cue-System.

First: The Cues have no mechanical effect. Th reason it is called Cue-System I don't know.

My biggest problem with it is passing the mic around (the system itself has some problems with it, too):
If players are not in Talk Time this gets a very Microscope-esque feeling.
Players should not influence each other, to get a great collaborative story.
But then there are the pre-written missions, telling you the things supposed to happen.
Sure, the book uses its Get out of jail-card telling you to skip the mission, if you think the current direction is better, but why include 30 missions, then?

Only the currently talking player is supposed to continue the narrative:

Players should feel like they can participate in general roleplaying banter when it's not their own Narration, but the GM should strive to prevent any one player from stealing the limelight from the player who is giving their Narration.

The player conducting the Narration will be moving the story forward, but other players are free to contribute thoughts, advice, quick character responses, and of course the occasional smart remark.

If another player sees a character struggling with a Narration, that player can spend a Plot Point to offer a one- or two-sentence detail as a prompt, in the same manner as outlined above.

Most importantly, playing out your dispositions, negative qualities, and especially using a plot point to make life more difficult for yourself is not rewarded in any way. Thus players will rarely do these things. They're GM things to do.
Of course the GM can say: "You shot yourself in the foot real bad, but it was cool, here's a Plot Point" but the system only tells you

Players may be awarded more *plot-*points by the GM for particularly good Narrations.

This is the same wishy-washy "we don't know how to award this currency, you figure it out" like DnD5E's inspiration.

Unlike in FATE (you see where this is going) where you get rewarded by shooting yourself in the foot.

It is a nice try, with some good ideas, but Shadowrun: Anarchy is basically a badly implemented FATE version of the Shadowrun setting with rules to port stuff from 5E to Anarchy and vice versa (probably dragging it down).